On Wednesday I went to Charlton on the bus with Raymond to go and see Kenneth. I was really worried about seeing him again because it’s been such a long time and also I was scared of what he might look like. He actually looked better than I imagined, although he’s very skinny and slouched. He’s got quite a lot of scars on his head and his eyes have got red dots in them. We went up to his room and Raymond hung around for 10 minutes then went home so I was left alone with Kenneth. He was lying on his bed in shorts and boxers, because he’s got nothing to get up for. At first we had quite a lot to talk about, but then it got awkward and there were a lot of silences. He’s just so bored though and it felt like he was taking it out on me even though he said I wasn’t pissing him off. After a while we went over to Raymond’s house. He’s got a room like a squat. There’s all graffiti all over the walls. We also sat in silence over there, but Raymond and I soon got talking. Kenneth kept giving me these really weird looks as though he was jealous I could talk so easily with Raymond, yet with him I couldn’t. At a quarter to five Kenneth walked me to the bus stop. I asked him again whether I was pissing him off, but he said no, this time with more compassion. I was hoping maybe he’d kiss me or hug me or something, but he didn’t and I was too scared to touch him just in case I hurt him. Anyway, I guess I’ll just have to see what happens. I may phone him tomorrow, I don’t know.

Yesterday I went to Golddiggers with Sheila, Percy, Jono, Timothy, and Tommy.  I couldn’t believe we got in so easily. I didn’t even get searched. The atmosphere was electric, everyone was wrapped up in their own little world. We were in there for about an hour before we all started raving to the sounds of the DJ Ramos. “Blow your whistles”. Timothy was funny raving, but that’s why rave’s so cool, you can do it however you like and no one takes the piss because they just don’t give a shit. I had two Malibu and cokes, 1 vodka and orange, and 2 cokes, so I wasn’t really pissed, but you don’t need to be because the music itself just gives you a buzz. Both Percy and Jono had some billy, but I don’t know where they got it from. The music just makes you move even when you’re sitting down, you can’t stay still. All the lads took their shirts off because it was just so hot in there. I was sweating buckets, which meant I didn’t look very good. I came out of there with my ears buzzing and it didn’t go until the morning. Timothy’s not having his party next Friday now, instead we’re all going to see DJ Dougal. The Diggers fever has got us. I think Kenneth’s trying to go so that should be really good. I can’t wait to see him raving with no shirt on.

*All names have been changed from those in my monthly teenage diary to protect the not so innocent.

Remember to come back tomorrow for the next installment of my 1995 teenage diary.

Missed parts of my Teenage Diary?

Keep an eye out on my social pages for Teenage Diary alerts! 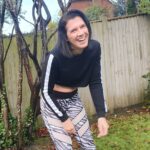 Becky Stafferton is a full time blogger over on her website The Art of Healthy Living, mum of 2 and certified Queen of the hashtags. She continually strives to promote a realistic, sustainable and positive image of how to lead a healthy life. When she’s not writing or reading her teenage diary she can be found swigging Prosecco from the bottle, running through muddy puddles, making lists of lists, having a good old moan, scoffing flapjacks and squatting like her life depends on it.

Useful Tips On How To Deal With Panic Attacks

The Profit Of Joy (1) By Pastor Paul Enenche » Flatimes

How Getting Enough Rest Can Be Key to Getting Toned