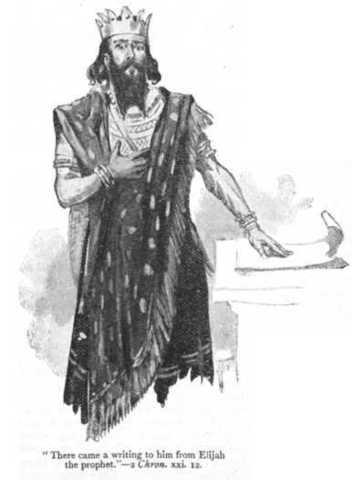 TEXT: 2 CHRONICLES 21:12-20.
🔑KEY VERSE “Thirty and two years old was he when he began to reign, and he reigned in Jerusalem eight years, and departed without being desired. Howbeit they buried him in the city of David, but not in the supulchre of the kings” (2 CHRONICLES 21:20).

The way people react to the news of a person’s death often reveals what the deceased meant to his people when he was alive. In Nigeria, there was a time that the death of a particular leader was greeted with cheers and jubilation. He was not mourned by the generality of the people; rather, his death was viewed as a good riddance. What this means is that the person, when alive, did not live a good life that was appreciated by the people.

Jehoram was that kind of person too. His ascension to the throne brought about all forms of atrocities and wickedness. The first thing he did was to kill all his brothers, for fear of being rivaled. He went on to rubbish all the good works that his father, Jehoshaphat, did and reintroduced idol worship in the land. His evils were so great that God sent a warning of judgement to him through Elijah the prophet, but he never bothered. He eventually died according to the words of the man of God but the people did not mourn his death.

This is always a strong reminder that our life on earth is a short one. No matter who we are, what we have and where we have reached in life, an end will come one day. What will matter then will not be what we had but how we lived our lives.

How do you live your life now that you are alive? Do people groan under you because of your wicked and oppressive nature? Or is your life such a pleasant one that everyone rejoices to bask in its sunshine? What will people say about you when death finally takes you away? Would they heave a sigh of relief or mourn that they would miss you? Remember, if men reject you for the kind of wicked life you lived, heaven will never accept you!

✍THOUGHT FOR THE DAY: Heaven cannot welcome you when the world rejects you for your wickedness.

Rejected by God, despised after death

HYMN Only remembered by what you have done