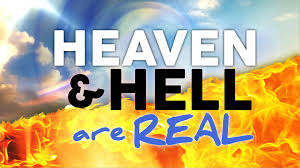 Sir Francis Newport, head of an English infidel club, said this on his death bed in the 18th century: “You need not tell me there is no hell, for I already feel my soul slipping into its fires! Wretches, cease your idle talk about there being hope for me! I know I am lost forever.”

The story of the rich man and Lazarus is so popular that anyone familiar with the Bible should have read or heard of it. This is not a parable at all but the real story told by our Lord Jesus Christ. Lazarus, a poor beggar eventually died and was carried by the angels into Abraham’s bosom, while the rich man died and went to hell, a place of torment. He was conscious enough in hell to acknowledge his pains and torments. He was intelligent enough to remember he had five godless brethren who could come to the same place of torment if nothing was done to bring them to salvation.

There are important lessons to learn from the story. First, the rich man did not go to hell because of his riches, but his trust in his money which became his idol. It was not Lazarus’ lack of earthly possessions and reaches that took him to heaven. Though he lacked even the most basic things on earth, he lived a godly life without complaint. The second lesson is the undeniable fact that hell indeed exists. Some people, like Russell, who cannot understand why a merciful God will condemn people to hell, have questioned the very existence of hell. Some erroneous teachers characterized it as a place where sinners are annihilated completely. But the cries of the rich man seal the scriptural description of hell as a place of eternal and unending torments.

What should be done then? Repent, if you are yet to and receive Jesus as Lord and Saviour in order to escape it. Warn others of its reality; never mind if they believe it or not. One day, they will.

✍THOUGHT FOR THE DAY: We must run away from sin to avoid hell.

BIBLE IN A YEAR: PHILEMON 1.

Salient facts from the story of the rich man and Lazarus

HYMN Are you ready for the judgment day?

Support Your Loved One With Addiction During The Coronavirus Pandemic