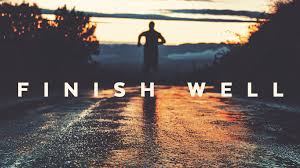 TEXT: 2 CHRONICLES 20:31-37.
🔑KEY VERSE “And after this did Jehoshaphat king of Judah join himself with Ahaziah king of Israel, who did very wickedly” (2 CHRONICLES 20:35)

History has records of several men and women who had wonderful sum of achievements at the beginning of their lives, but ended with one shameful blemish or the other. They are like sprinters who started off strong in a race only to stumble close to the finishing line. All these go to prove that though starting well matters, finishing well and strong is more important.

King Jehoshaphat had the record of being one of Judah’s most successful kings. He was able to rally the nation back to God, carried out some reforms and led the nation out in faith against strong and powerful nations in battle. But as the story of his life ends in our passage today, it concluded with a dent in his character. He got into alliance with the ungodly King Ahaziah in a business deal. God demonstrated His displeasure against this ungodly and unequal yoke, by causing the business to suffer a serious damage and to fail.

Christians ought to be more careful with their lives, especially at a time when they seemed to have reached the peak of their career. The tendency at such a time is to relax, take off the guard and become less careful. It is at such times that the devil often takes advantage to sneak in and deal a damaging blow. God does not permit at the end of our lives the things He forbids at the beginning. If He condemned unequal yoke, worldliness, divorce, etc., at the beginning, He is still does today and will still do to the end of the race.

It will be so unfortunate and very tragic if at a time that we are very close to the finishing line of our race, we allow ourselves to fumble and stumble. This will rubbish all the good records we have and the efforts we have put into the race. Therefore, stay on your guards. Keep your convictions strong. Avoid compromise and do not give in to ungodly associations.

✍THOUGHT FOR THE DAY: It is not enough to start well; it is more important to end well.

“Love”: The source of all besetting sins

LESSON FROM THE RICH FOOL

When The Wicked Goes Unpunished!

The Praise Of Faith (1&2) By Pastor Paul Enenche » Flatimes

Seeds of Destiny 23 November 2020 Devotional – The Conception Of...

THE DESIRE OF THE RIGHTEOUS